Hit enter to search or ESC to close
Cold War

This weekend provided the opportunity for a game with a new opponent, Tony, who I met at the recent Little Wars Canberra demo game. We had chatted on the day, and as he was keen to get back into modern gaming, we organized to catch up for a game.

Tony had not played the Fistful of TOWs rules before, although he had read the rulebook. I thought the best option would be a relatively small scenario to run him through the rules.

Due to the imminent release of the Battlefront rules of the same name,  Team Yankee has been a great topic of conversation lately. I figured that would be as good a place as any to start and I would base my scenario around that theme.

For those that have read the novel, Team Yankee is a company-sized US combat team in the Cold War (mid-1980s) that sees a lot of action fighting off the Soviet hordes in a fictional invasion of Germany. Team Yankee is a tank-heavy combat team, comprising a couple of M1 Platoons, a cross-attached Infantry Platoon (in M113s) and an attached section of M-901s.

This is what the US force would field in my Pico version, except that the M-901s would be a full platoon. As only a company-sized force of four platoons, this would be a very small force for FFT, but that’s what I was after to keep things simple. Team Yankee would be supported by the battalion’s SP Mortar Platoon, along with a Battalion of M-109 SP 155mm Artillery.

The opposing force was a Soviet tank battalion of three companies (9 platoons) of T-80Bs (I couldn’t quite come at using the T-72s featured (somewhat in error) in the novel. The tank battalion also had an attached company of infantry (3 platoons) in BMP-2s , along with artillery support from the parent regiment’s battalion of 2S1 SP 122mm guns.

The scenario was a “Hasty Attack”, based very loosely on an action from the novel,  and also included in the scenario book The Bear Marches West by Russell Phillips (shown below), as the Check and Checkmate scenario.

The general gist of the scenario is that Team Yankee has captured the ridgeline (R of picture) and must hold it until reinforced. The Russians launch a hasty attack to take the hill back from the US troops, before it can be consolidated.

The battlefield is shown below. We used my hidden deployment system described previously on this blog (a counter for each unit, plus two ‘dummies’, per side). As there was only one unit per side (US company vs Soviet Battalion), that meant three counters per side, however we gave the US an additional one for the M-901 platoon, which was allowed to set up out of cohesion if desired. 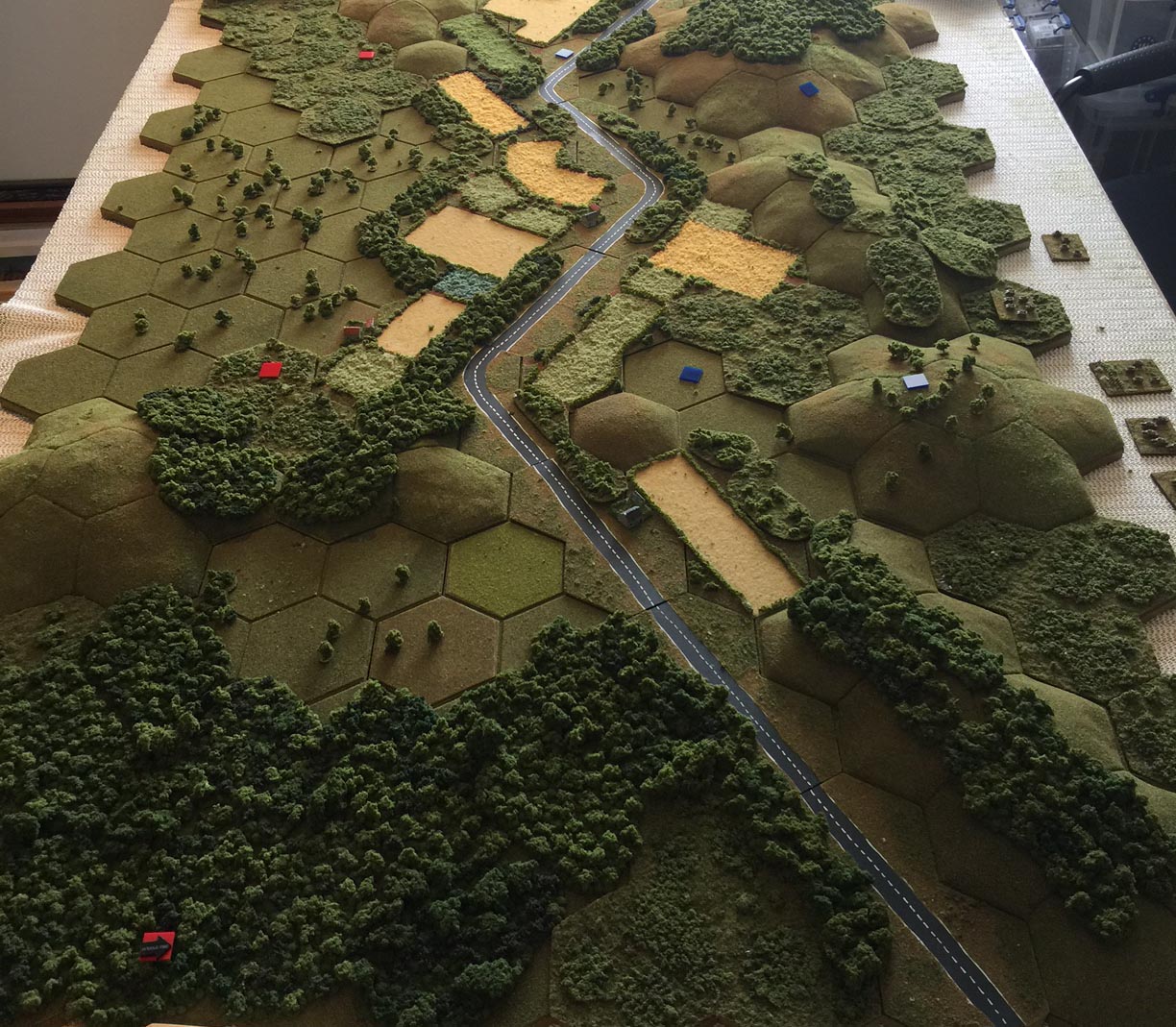 Team Yankee set up their counters across the whole front, along the ridgeline. No clues for the Soviets as to where the US troops were deployed initially!

Somewhat predictably, the Soviets entered their three counters with one in the centre and one on each flank, to keep the US troops guessing for a turn or two. Since time was limited (6 turns), the Soviets really had to act quickly to take the objective ridgeline. The counter on the Soviet right flank was to be the real force, with the other two being dummies. The right flank offered a covered approach to the ridgeline though woods. This would slow the advance slightly, but would provide concealment in the initial turns.

In the first couple of turns, the Soviets advanced through the woods on the right flank. The two other (dummy) counters also advanced along covered approaches, keeping the US forces guessing as to the location of the real main effort. In the initial maneuvering, the dummy counters on both sides were spotted and revealed as dummies. It soon became apparent that the Soviet thrust was up the right flank. Team Yankee and the attached M-901s were the two most central counters.

Once this became obvious, it was clear that the soviets had stolen a march and would be onto the ridgeline in the S within no time. Team Yankee would have to redeploy to cut them off or counter attack. The Soviets laid a large smoke-screen to cover their left flank as they advanced. 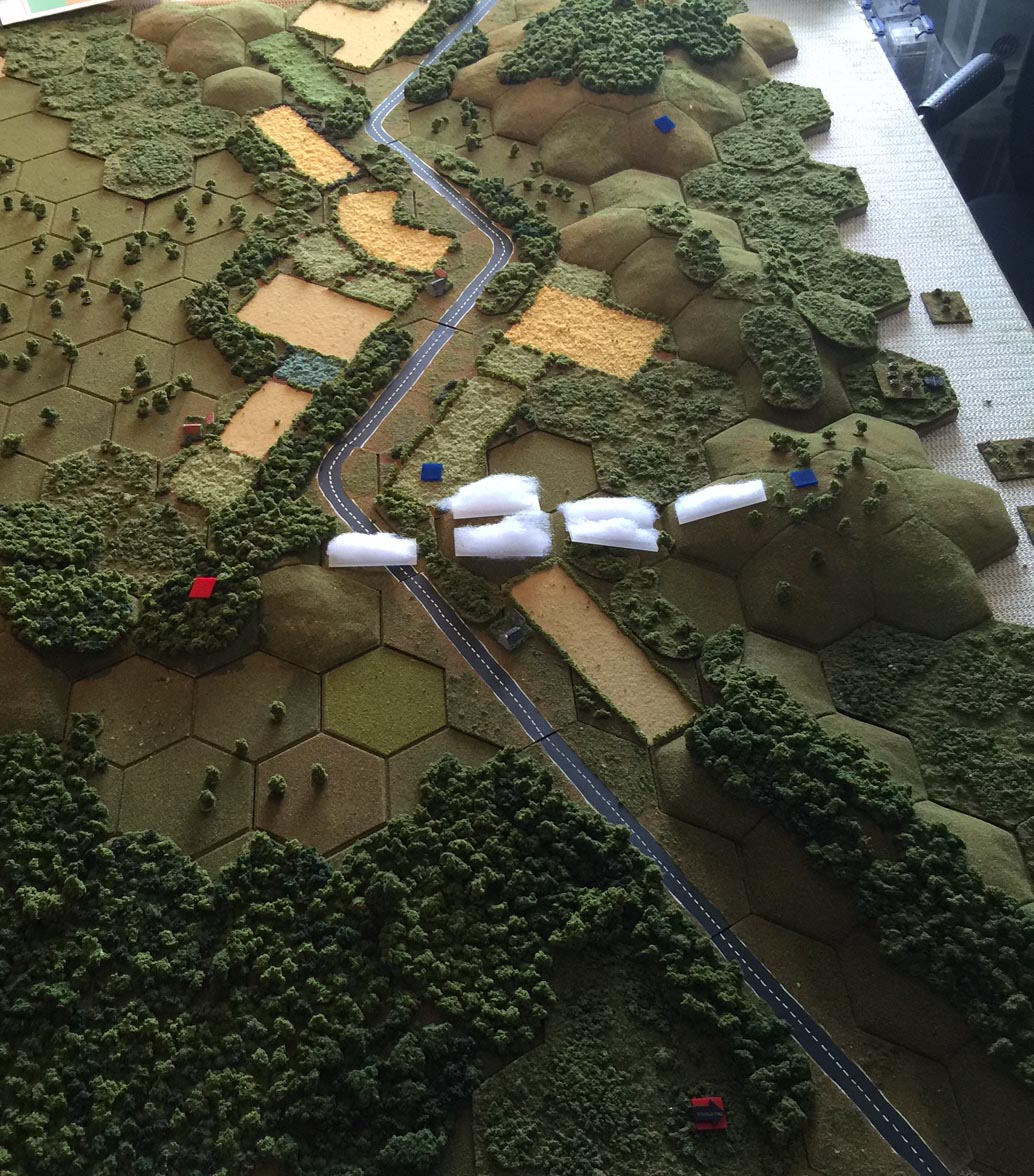 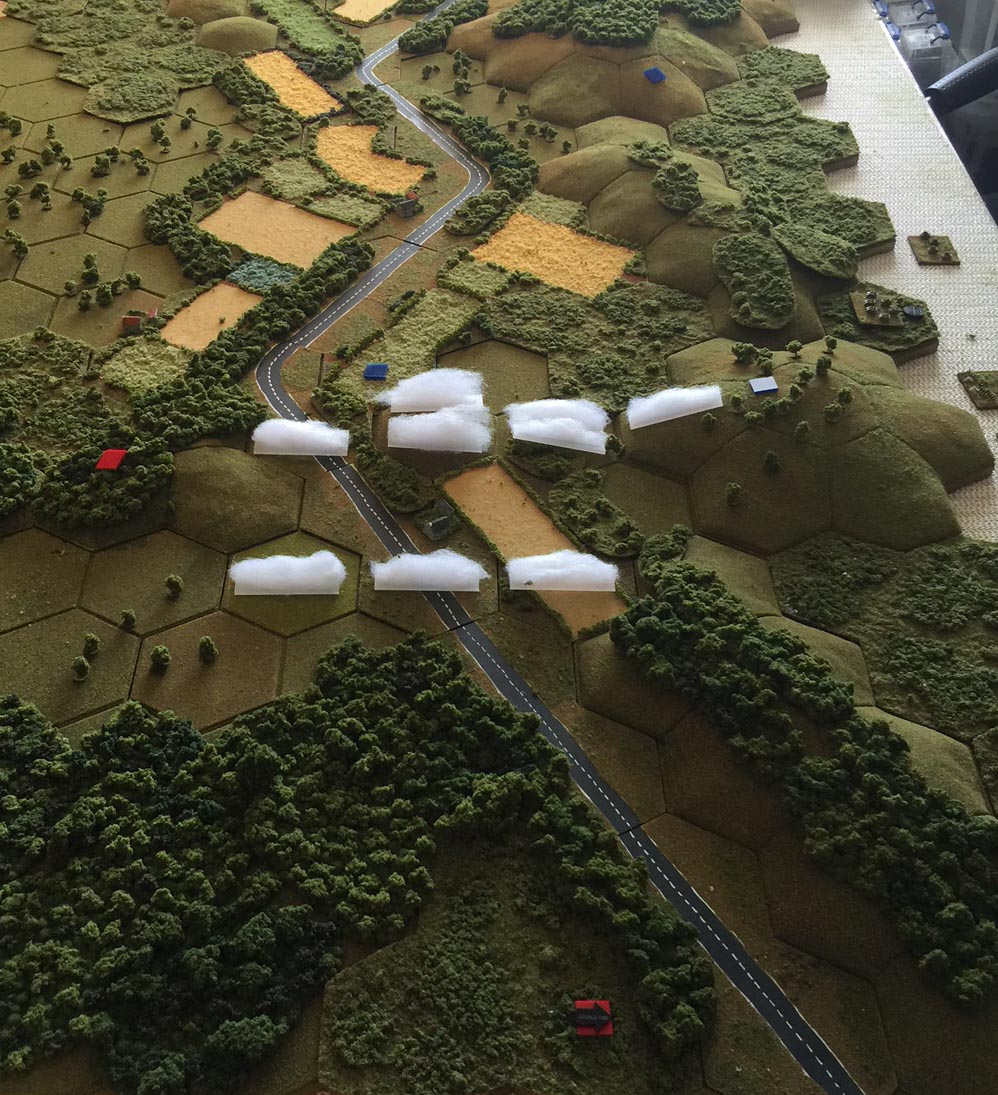 The entire Combat Team swung south. One of the M1 Platoons took up a hull-down over-watch position on the low rise covering the road and the approaches onto the ridge.

The remainder of the Team marched around to the SE and back around to take up positions on the objective ridgeline, from the E. 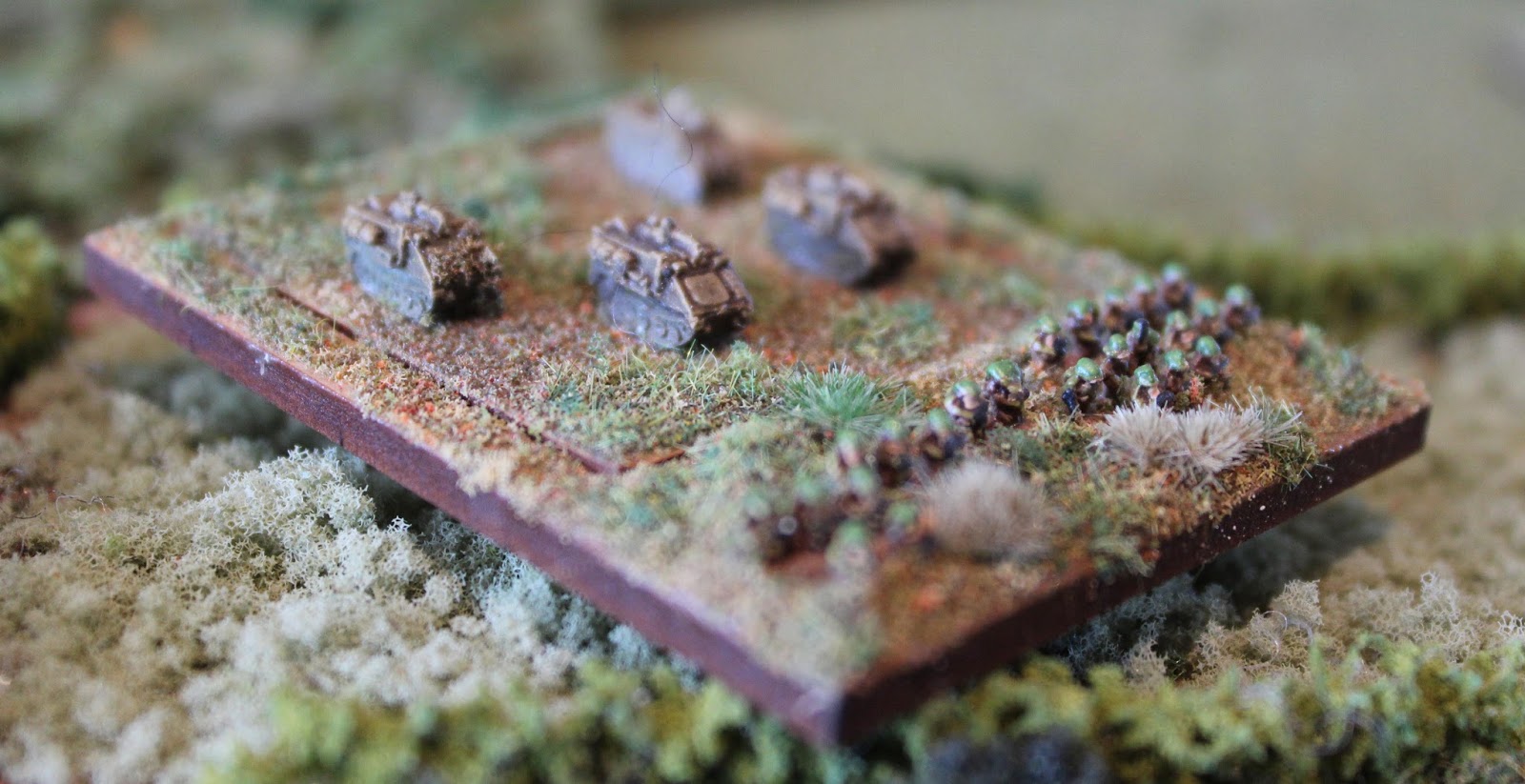 The Soviets dismounted the Infantry Company, which broke cover from the woods and crossed the gap to advance on the objective. The over-watch M1 platoon pinned one of the infantry platoons as it advanced. 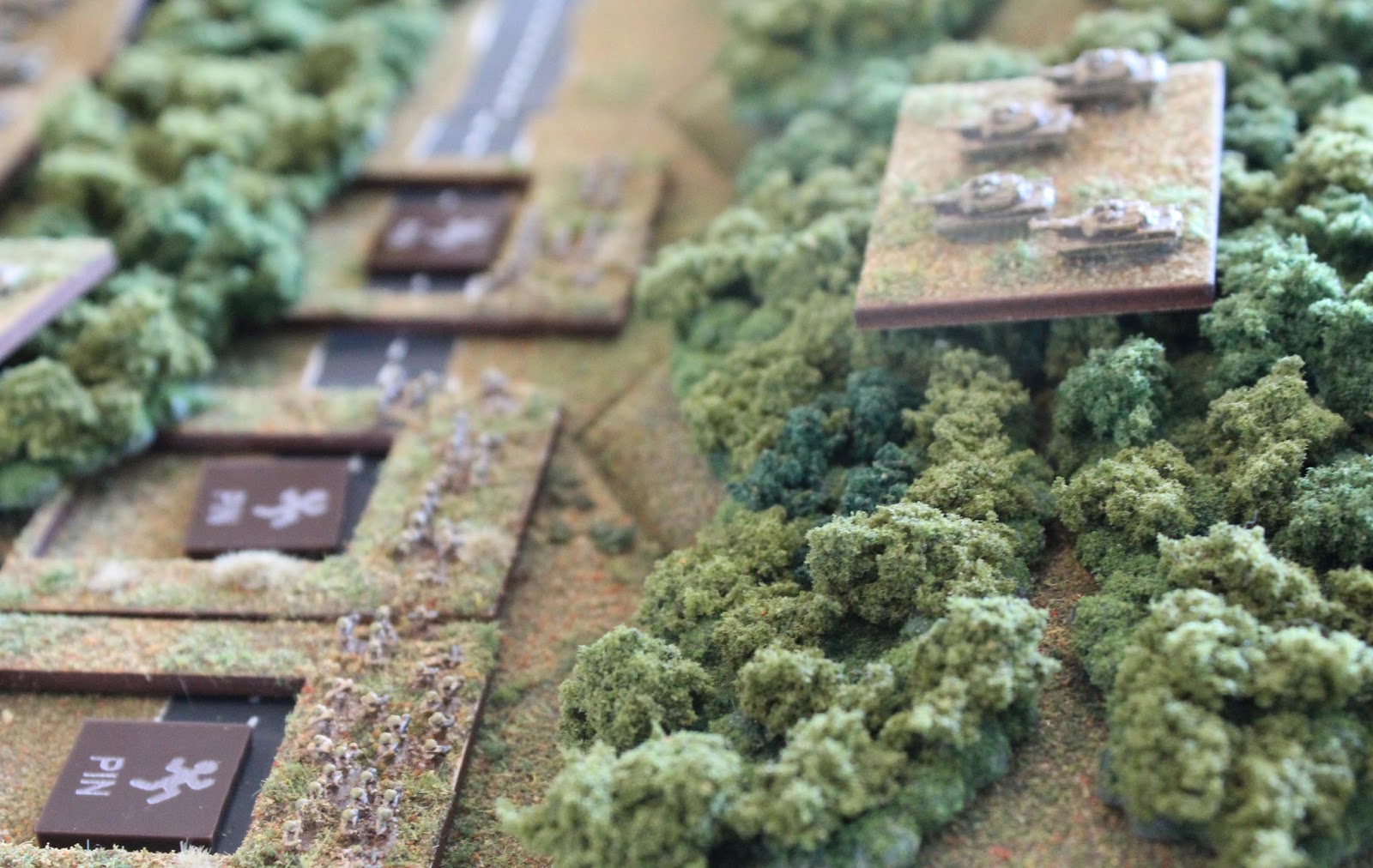 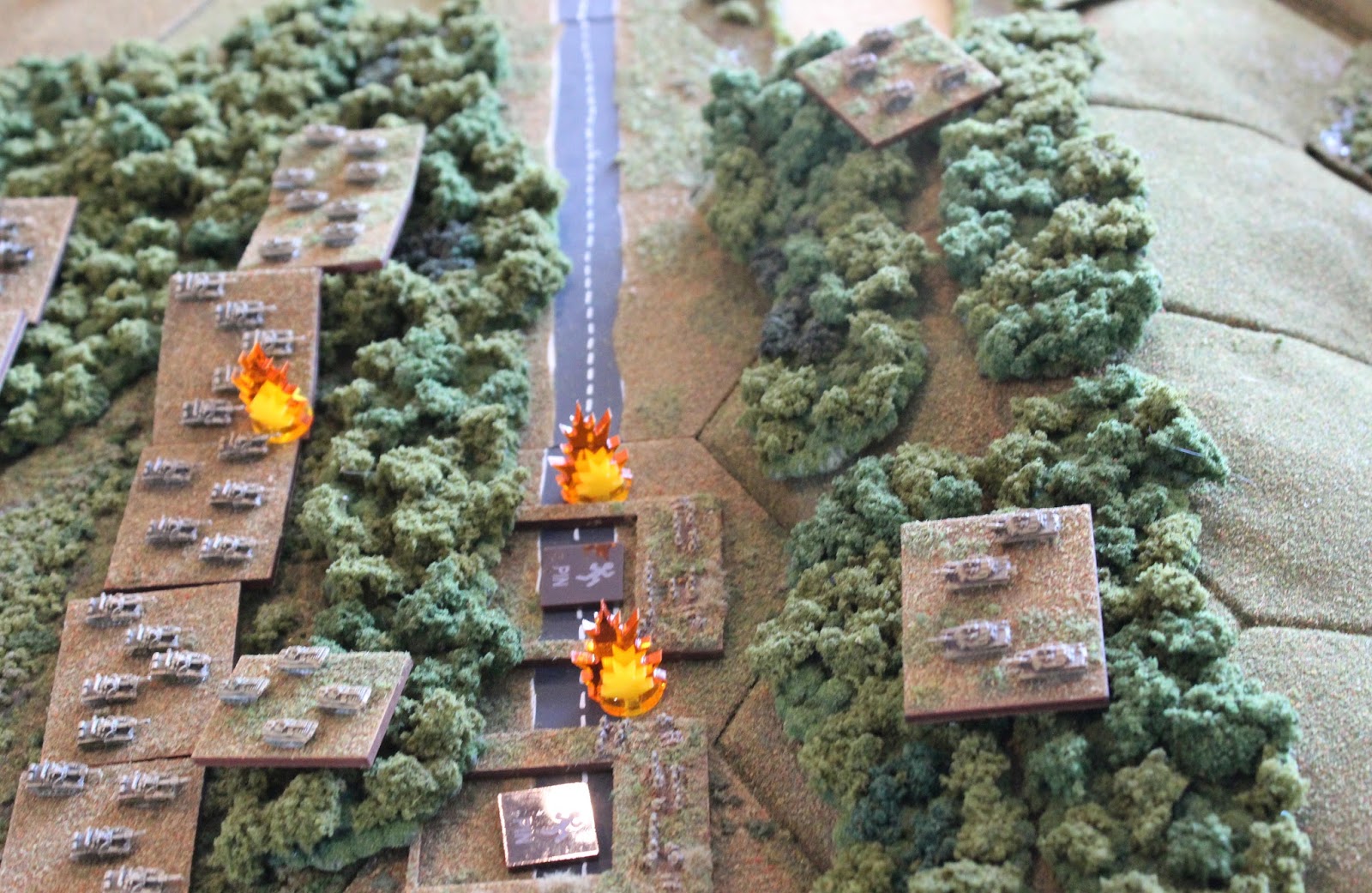 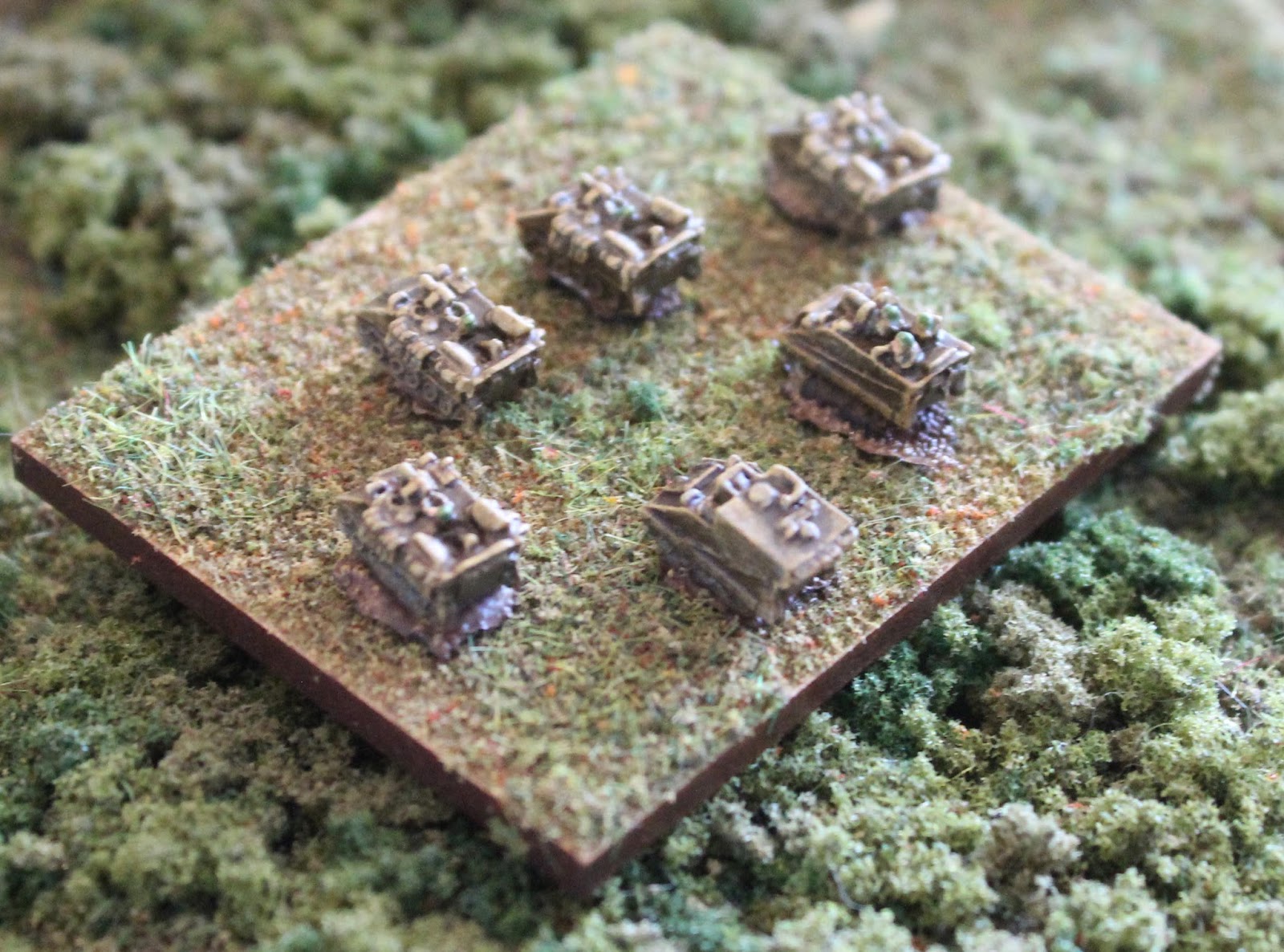 The Soviet artillery targeted the defenders on the ridgeline. The 2S1 battalion fired on the Mech Infantry platoon and their M113s, pinning both. Shortly after, BMP-2 platoons in the tree-line poured cannon fire into the US Infantry platoon, destroying them. 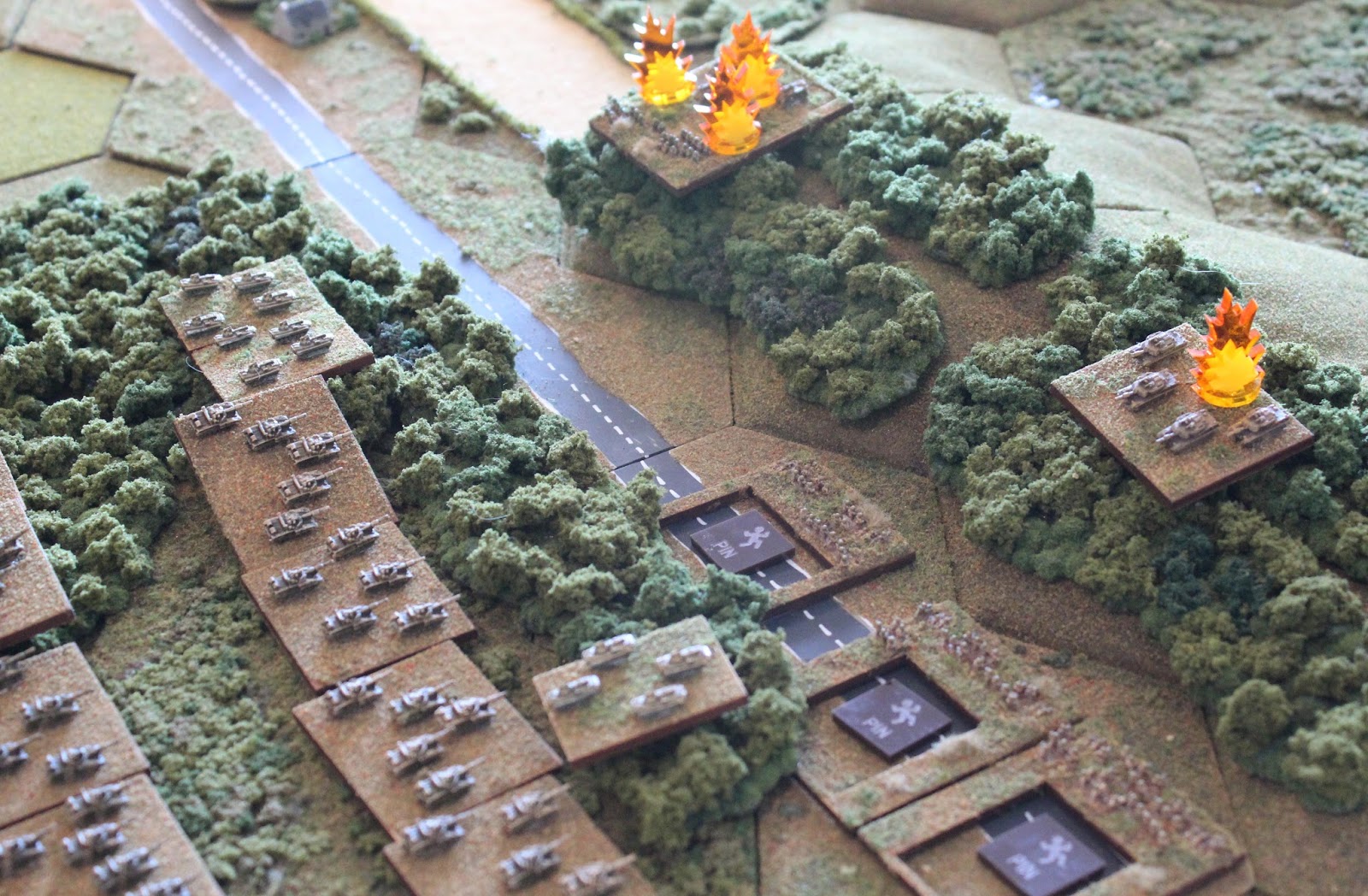 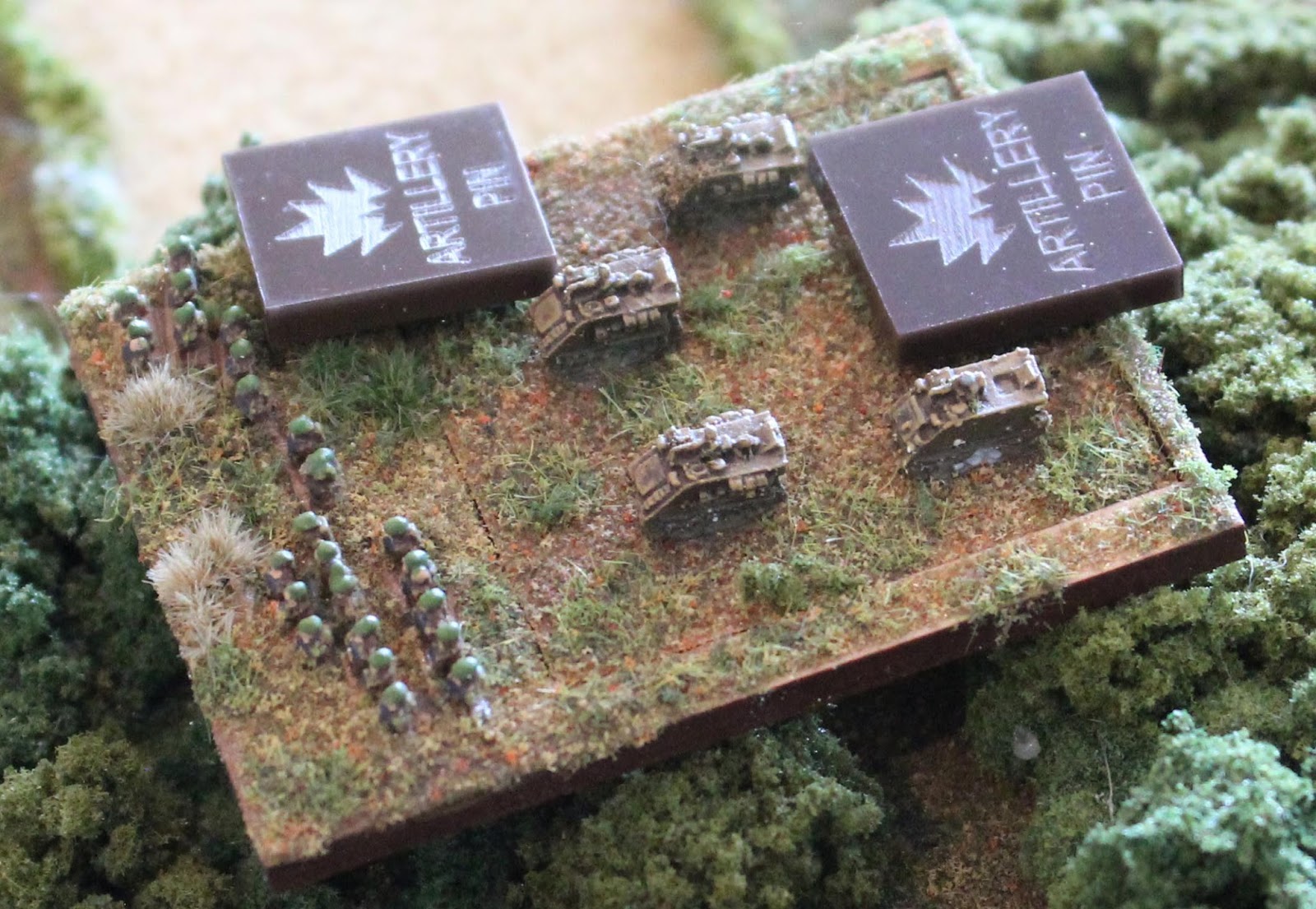 At the same time the Soviet infantry assaulted onto the hill. the assault was supported by two T-80 platoons firing direct Area Fire at the M1 platoon. Unfortunately this pinned the M1 platoon, but even so its defensive fire destroyed both dismounted infantry platoons that were assaulting them. The over-watch M1 platoon also destroyed a T-80 platoon and pinned a second one. 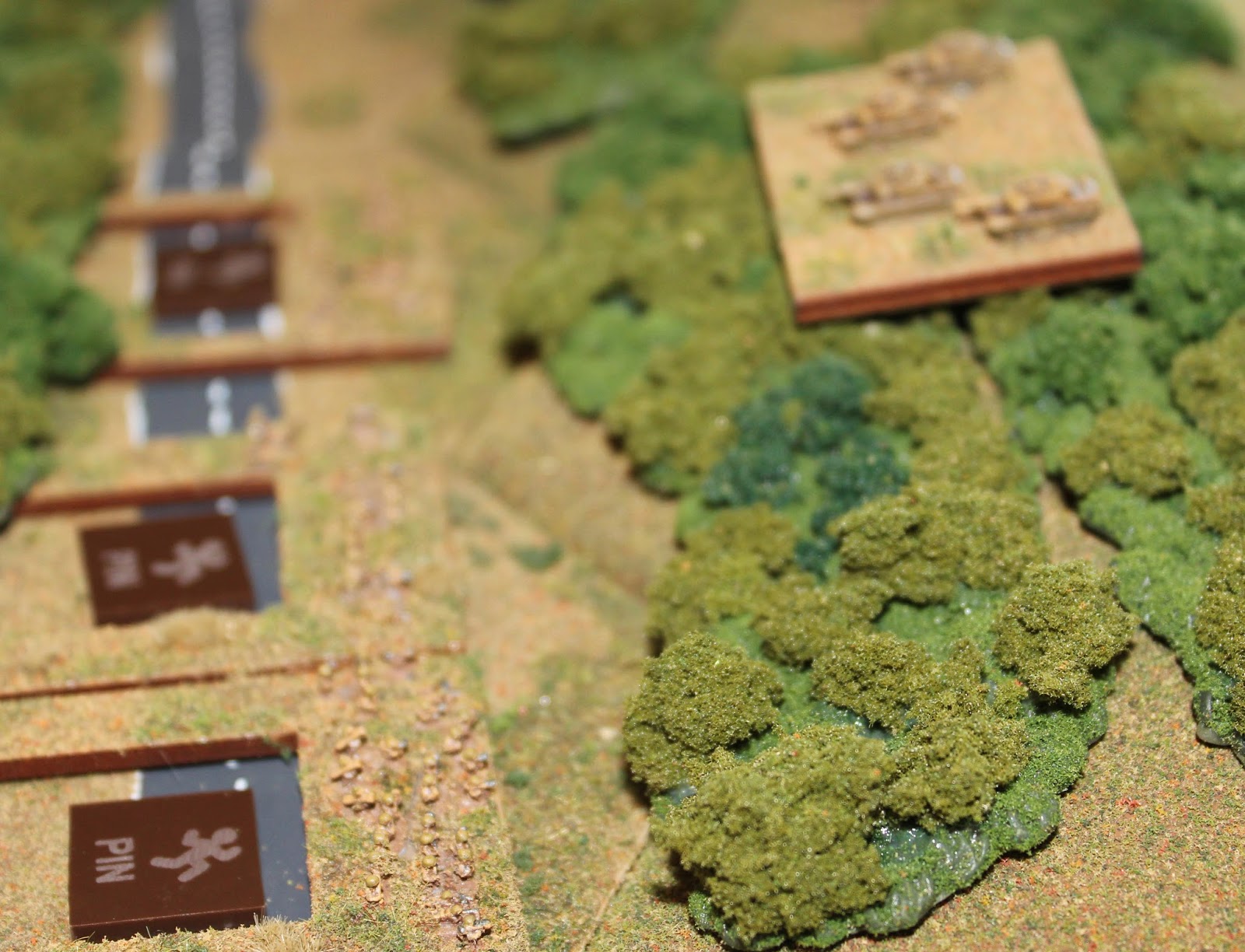 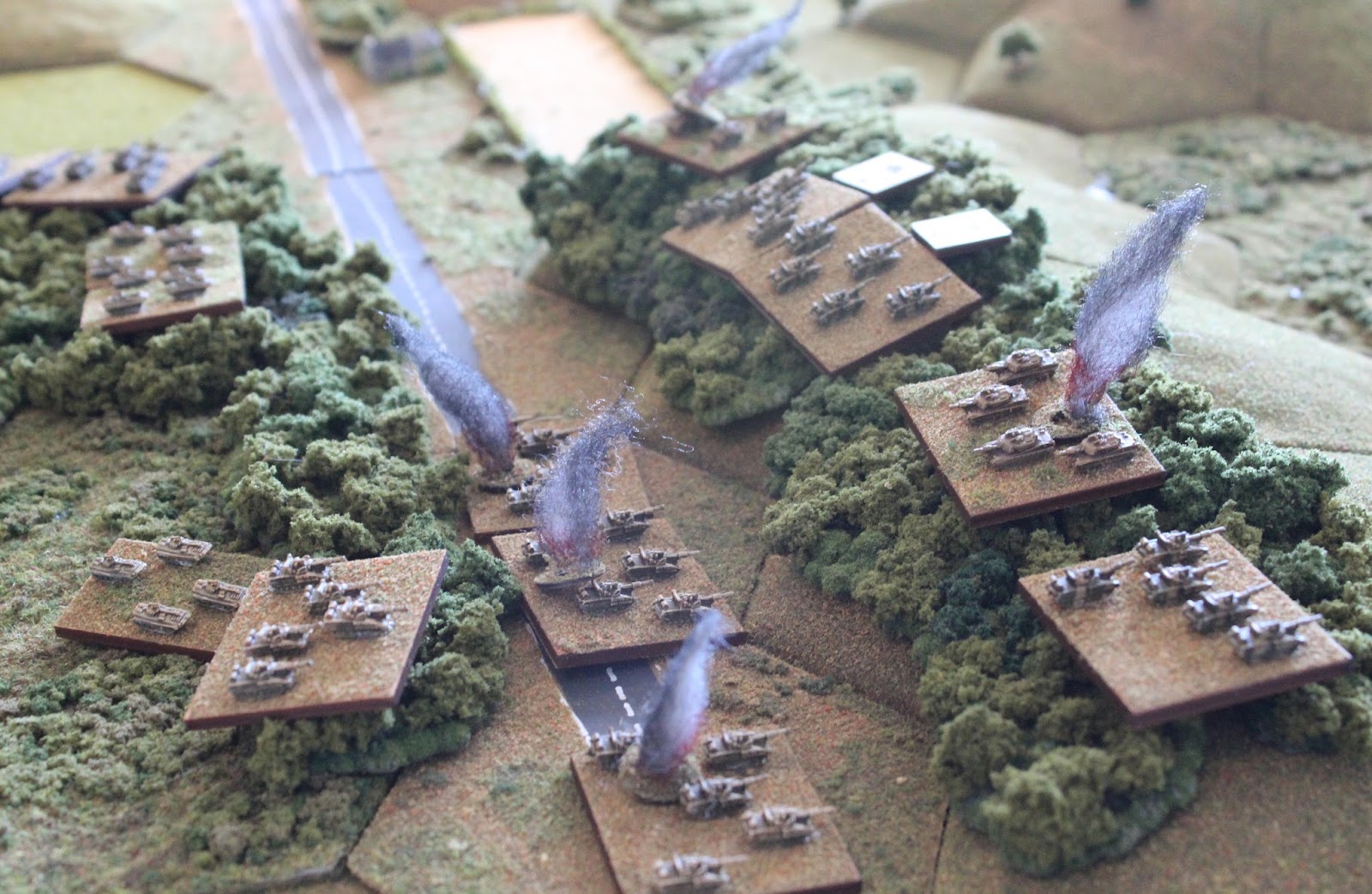 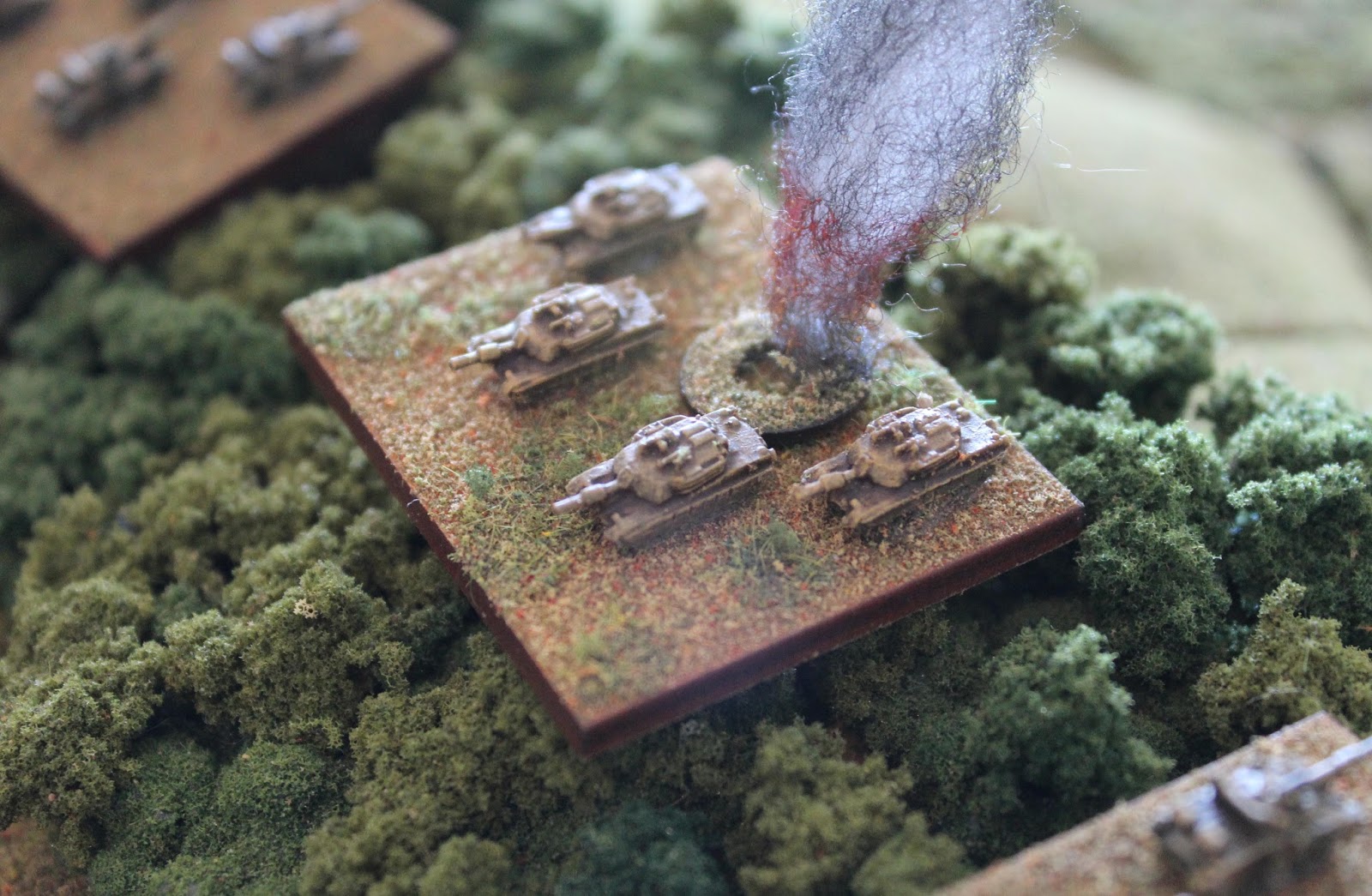 In the subsequent turn, BMP-2s took up positions in the tree-line and destroyed the M-113 stand with point blank cannon fire.

Several platoons of T-80s also moved to a position on their battalion’s flank, in order to return fire at the M1 platoon in over-watch on the distant hill. These were able to destroy the M1s within a couple of turns. 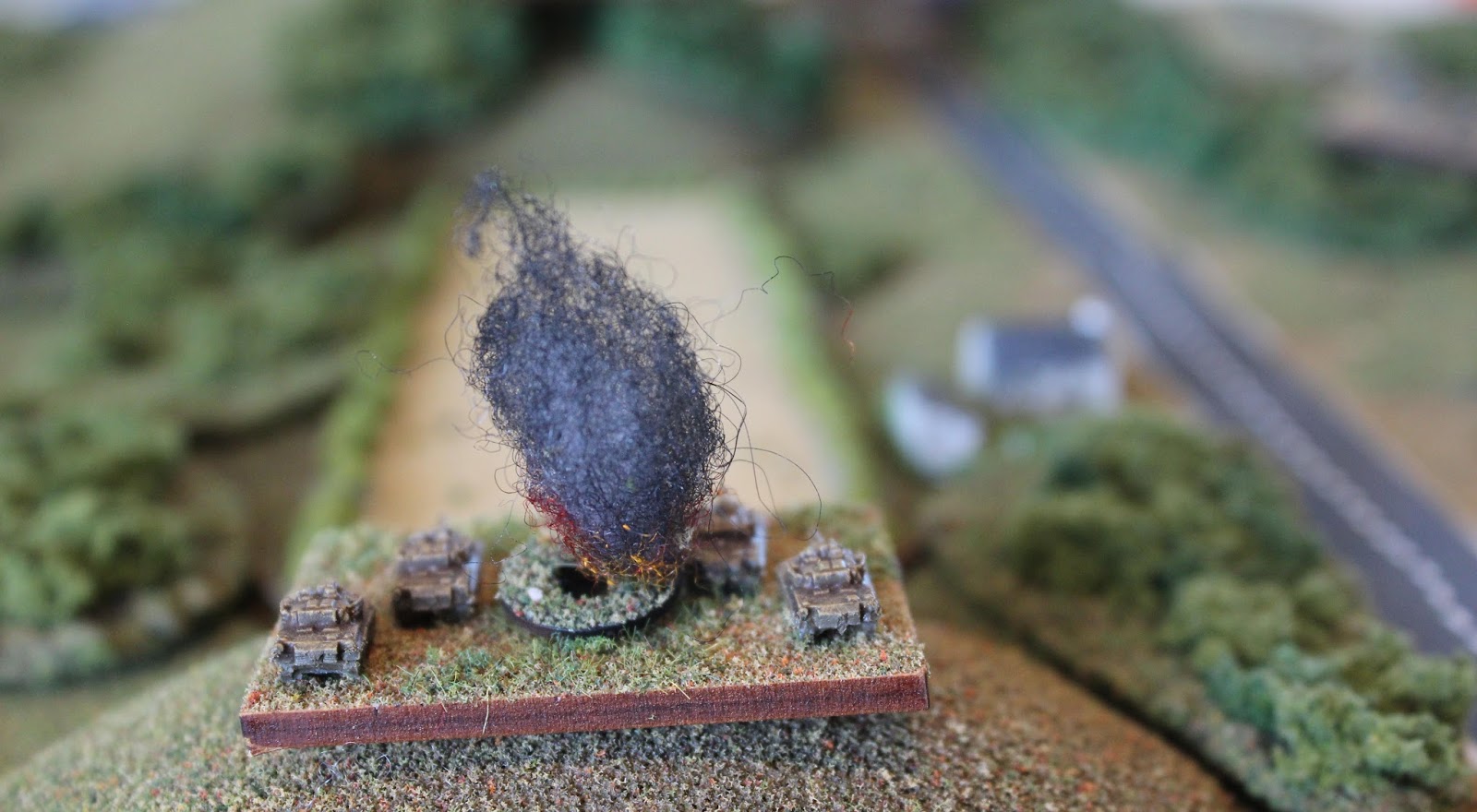 The M901s had been moving into position to try and have some influence on the fight. They finally took up position straddling the road, and able to cover the gap between the woods and the objective hill. But they arrived too late. 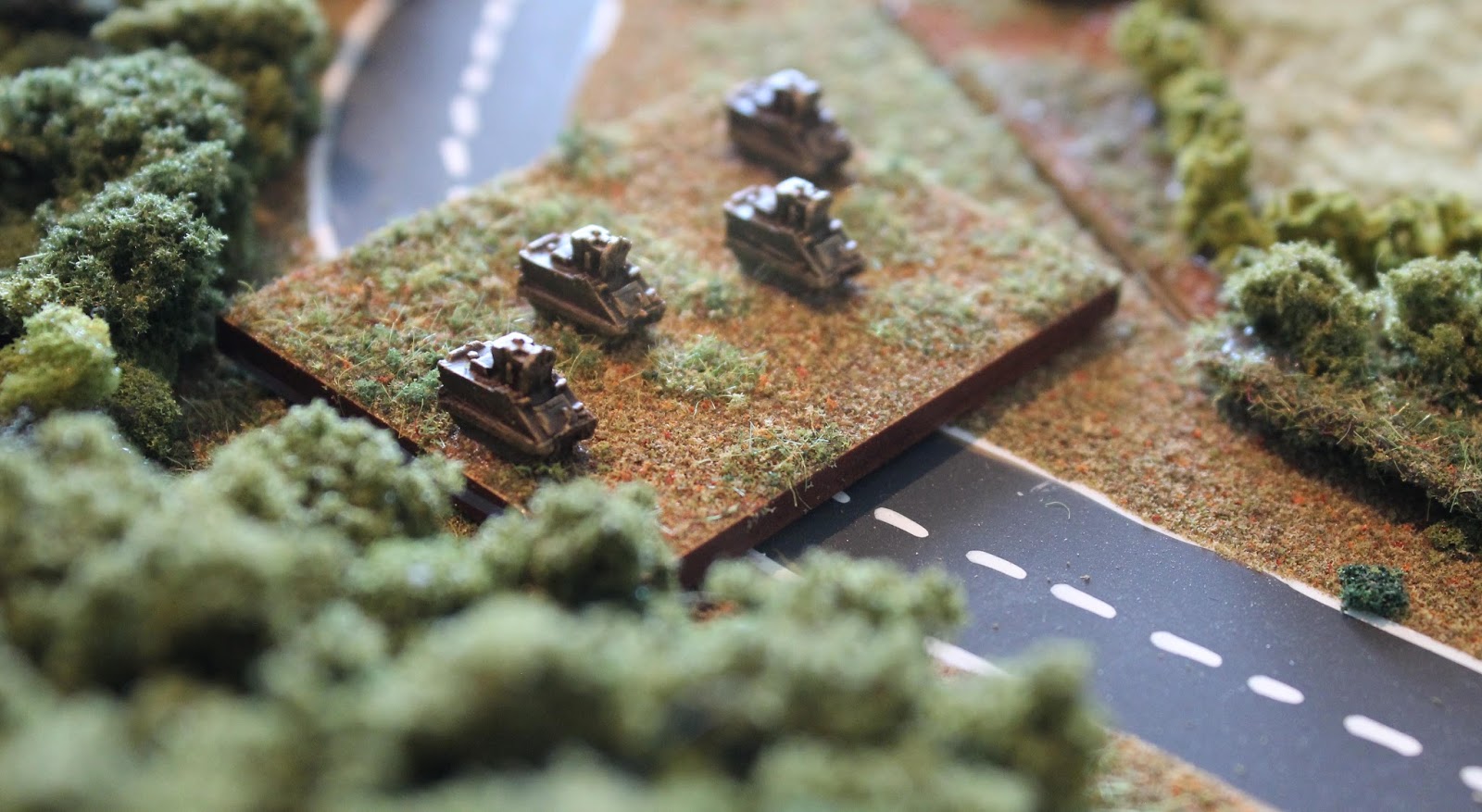 One interesting thing I noticed was that the contemporary M1 and T-80 MBTs are really quite even in their technical abilities. The US tanks had a slight advantage in their Thermal Sights, their Rate of fire, and in the quality of the crews in this scenario. Both forces were a bit limited in their ability to capture or hold terrain, due to their lack of infantry.

It was a good fun game, achieving a useful and quick intro for Tony to the FFT rules. We’ll be having some more games in the future.

Read more from Bish at the Tiny Tanks 3mm Blog 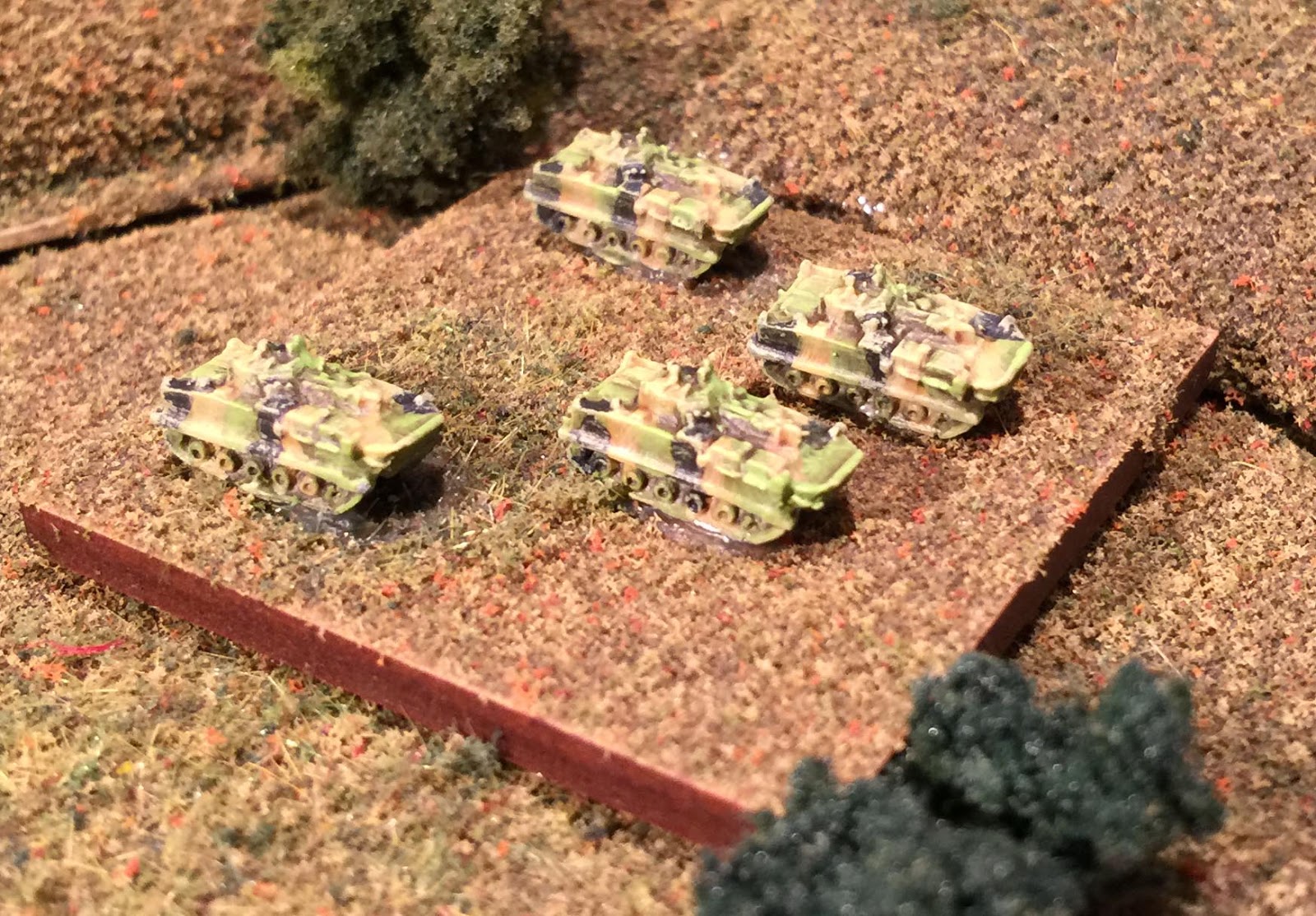