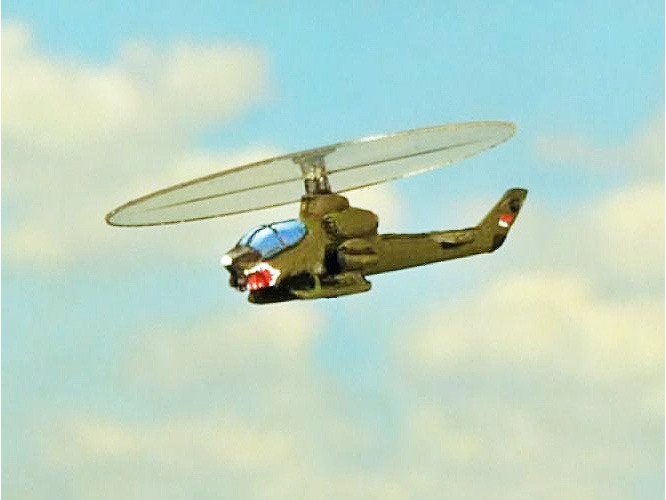 The Bell AH-1 Cobra is a two-blade, single engine attack helicopter manufactured by Bell Helicopter. It was developed using the engine, transmission and rotor system of the Bell UH-1 Iroquois. A member of the prolific Huey family, the AH-1 is also referred to as the HueyCobra or Snake. It first entered service in 1967. The AH-1 was the backbone of the United States Army’s attack helicopter fleet. The AH-1 twin engine versions remain in service with United States Marine Corps (USMC) as the service’s primary attack helicopter. AH-1 Cobras were in use by the Army during the Tet offensive in 1968 and through to the end of the Vietnam War. Cobras provided fire support for ground forces, escorted transport helicopters and other roles, including aerial rocket artillery (ARA) battalions in the two Airmobile divisions. They also formed “hunter killer” teams by pairing with OH-6A scout helicopters. A team featured one OH-6 flying slow and low to find enemy forces. If the OH-6 drew fire, the Cobra could strike at the then revealed enemy. It has a crew of 2: one pilot, one co-pilot/gunner. It has a maximum speed of 171 mph and a range of 357 mi. It carries a an armament consisting of 2 × 7.62 mm (0.308 in) multi-barrel miniguns, or 2 × M129 40 mm grenade launchers, or one of each, in the M28 turret; 2.75 in (70 mm) rockets – 7 rockets mounted in the M158 launcher or 19 rockets in the M200 launcher; and M18 7.62 mm Minigun pod or XM35 armament subsystem with XM195 20 mm cannon.