View cart “ACW Infantry II (15 pcs)” has been added to your cart. 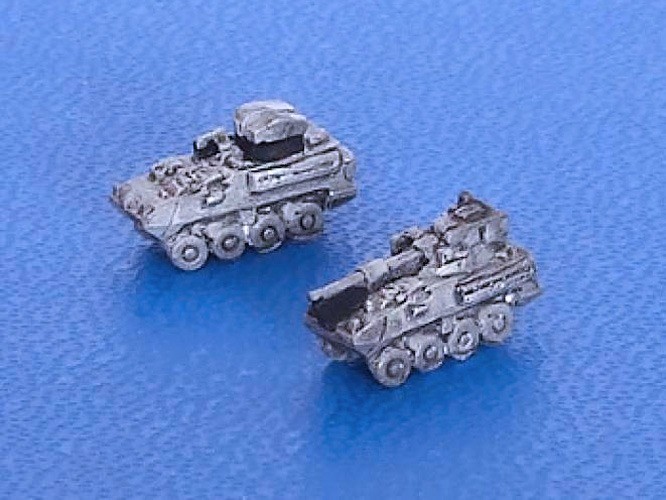 The Stryker is a family of eight-wheeled, armoured personnel carriers (derived from the Canadian LAV III/Swiss MOWAG Piranha IIIH 8×8) used by the United States Army. The Infantry Carrier Vehicle provides protected transport and, during dismounted assault, supporting fire for the infantry squad. The Stryker is a full-time four-wheel drive, selectively eight-wheel drive, armoured vehicle weighing approximately 19t which carries an infantry squad with their equipment. On paved roads the vehicle can attain speeds of 62 mph and a range of 311mi. M1134 Anti-Tank Guided Missile (ATGM) Vehicle is a variant of the Stryker family of vehicles specifically designed for the anti-armor role. As the brigade’s primary tank destroyer system, the ATGM reinforces the brigade’s infantry battalions, reinforces the brigade reconnaissance squadron and provides long-range direct fires. It is capable of defeating many armored threats up to 4 kilometers away using the TOW missile system. The M1128 Mobile Gun System (MGS) is a variant of the Stryker armored fighting vehicle mounting a 105 mm M68A2 rifled cannon. The MGS can store 18 rounds of main gun ammunition in the autoloader cassette located in the rear compartment of the vehicle. It has a rate of fire of six rounds per minute.